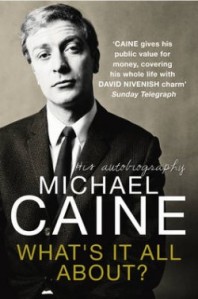 This is the autobiography of the actor behind the famous face of the original Alfie. Actually, he’s done more than his fair share of movies, shows and plays. IMDB lists it all and so far it comes up to 361! Not bad for someone whose career only took off at the age of 33.

His autobiography was, in his words, “To set the record straight on my own record player for a change”; and he certainly has. He spins many entertaining stories of his life and is fascinating to the point of incredulous. Quirky stories with well timed punch lines are his thing such as the reason he hates the smell of garlic, why John Lennon called himself Joe Lemon, and which animal apparently portrays Marilyn Monroe.

As this is a book in his defence, I suppose it’s not altogether surprising when he paints himself in the best way possible but this is not to say that he doesn’t find the time to poke fun at himself. There are many stories which will tickle you pink at his expense, as well as other famous people. Then again, he reveals some very deep and personal things about himself and his family which makes the book more than just a stand-up piece.

Caine is, in fact, a terrific writer. He has flow, wit, legibility and the ability to end a story when it needs ending. His book holds many gems from acting tips to what goes on behind the scenes during shooting to how agencies work in Hollywood. Moreover, you also learn about the origin of names, eras, cultural references and a chance to see a more personal side of many famous people such as Woody Allen, Elizabeth Taylor, Frank Sinatra, Margaret Thatcher and even the Queen of England! Our beloved Sydney Harbour Bridge also manages a cameo, alluding to just how many countries he references.

‘What’s It All About’ is definitely worth a read, especially if you’re an aspiring actor. Caine will charm and inspire you whilst keeping you guffawing at his antics until you cannot but walk away with admiration for this determined man’s gumption and devotion to all the things that he holds dear.

p.s. incidently, Caine has released in Sept 2010 a memoir titled, “The Elephant to Hollywood”.