You’ve probably seen ads around the place for the new show “Game of Thrones” currently being advertised for Foxtel’s Showtime channel (on at 8:30pm Sunday nights). If you’re a fan of Epic Fantasy novels and the like, you may want to check this series out. It’s definitely a show that you need to warm up to, as the first few episodes as Ant described it, “it’s like watching medieval news”. It’s dark, it’s twisted and at some points pushes your comfort zone with it’s violence, scandal and shock value – some call this “fantasy grown up”. George R. R. Martin’s series isn’t for the faint-hearted and growing to love characters in this series may seem futile as everyone is fair game to leave the plot at any time. You do get some likeable characters and each of Martin’s original books is set to become one season worth of the series, so this first season corresponds with book one of the “A Song of Fire and Ice” series. 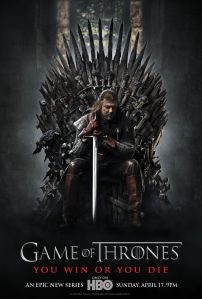 At first we found it a little difficult to stomach, I think the notion of it’s depravity and perhaps our own desensitisation to that really hit us watching this and we felt like we might not make it through the entire season, but as we rounded episode 4 (of 10) the storyline fleshed out enough that the intrigue started to draw us into the world of Westeros. By the subsequent episodes you start to appreciate the story and development, though initially I was a little disheartened to see there were no strong female characters that were noble/honourable enough to really respect in the show, but I felt much more satisfied by the end of the season.

There are some taboo and definitely dark themes in the series so you’re probably not going to want to let the kids watch this one. Look out for Peter Dinklage as Tyrion Lannister – he adds some funny lines and persona to the series and the Emmy nominations he received are certainly warranted.

I’m really enjoying the boom of these shows, I only wish they would turn Raymon E. Feist’s world of Midkemia into a series.

If you’re into your historical dramas, fantasy series or just something to watch – check out Game of Thrones and give it a try, if you can sit through the beginning you’ll cruise through to the end of the season. If you’re looking for other similar themed shows to watch here are a few I have enjoyed:

Let me know if there are any other shows you suggest, I’d love to check them out!