Starting off the year with both the Galaxy S II and the Galaxy Nexus in my hand, I thought I’d write a few thoughts on my experience and research into the ‘better’ phone. Ultimately, I believe it’ll come down to each person’s personal choice, but on some fronts you can definitely feel the difference! I’ll break it down into five areas that led me to ultimately choose the S II over the Galaxy Nexus.

If you’re looking for a phone with good specifications, runs on Android and has a decent camera then you really should be looking at these two phones! In terms of hardware the S II pips the Galaxy Nexus at the post. It has a 1.2 GHz dual-core “Exynos” system on a chip (SoC) processor, as well as, 1 GB of RAM and the WVGA Super AMOLED plus 4.3″ screen. Pretty good so far, the Galaxy Nexus on the other hand runs a dual-core 1.2 GHz TI OMAP 4460 processor (ARM Cortex-A9) with 1 GB of RAM and a 4.65-inch 1280×720-pixel HD Super AMOLED PenTile display. From the research I’ve done, this seems to be of slightly lower specifications than the 9 month old S II, so on this front having the S II running the better hardware made sense in the long term (though there are other arguments there with it being ‘older’ in general). The difference is not huge, but it is noticeable.

The other camera on the front differed as well between the two phones, the S II hosts a 2 mp front facing camera compared to the Galaxy Nexus with its 1.3 mp camera. For me this was a bit of a make or break feature as I tend to use the phone for a lot of face to face conversations on Skype. You can definitely notice the quality of the video and recipients of my calls have also noticed the definition and clarity is much sharper (this may not be so good if you don’t want everything on your face to show).

The cameras on these are different and sort of backwards, the S II has the 8 mp camera and the Galaxy Nexus the 5 mp camera, now, having worked in the past in the camera industry I know megapixels mean diddly squat generally and shouldn’t be the only aspect of a camera you should focus on. Between these phones the differences are slight and I really think this will be personal preferences on colour, saturation etc. From what I’ve seen the Galaxy Nexus supposedly does better low light shots, but this has been found by some and not by others. I chose to go with the SII 8 mp because I noticed the colours to me looked more natural generally and the clarity overall was quite good and the end of the day it’s a camera phone, it’s not suppose to replace your SLR. The S II also seemed to handle filming in HD much better probably due to the processor differences.

On a plus for the Galaxy Nexus, it is VERY snappy from switching to camera and taking a shot, so in this sense the lag free might be a clincher for you. I found it a bit annoying because it was so fast that I would take random shots by accident, but that’s just a matter of getting used to I’m sure.

* Pictures in Ant’s article about the Night Owls cinema were taken using the S II camera.

What’s a few grams? The S II is purported to weigh around 116g whilst the Galaxy Nexus a heavier 135g. Not exactly back breaking, but there is a difference when holding them and I’m definitely not a believer of heavier = expensive. Heavier to me just means more likely to be damaged on impact. Lighter means it has a better chance of getting away with a fall. Not that I drop my phones! I’ve read a lot of people find the S II ‘flimsy’ but I have to say, I don’t agree, perhaps again because I haven’t come from an iphone which is significantly heavier at 140g which is a substantial and noticeable difference.

If you come from an Apple phone, this probably won’t be a big deal for you. For me it wasn’t going to break the deal, but I definitely prefer having an SD card that I can remove and expand in size. The S II was then the logical choice because the Galaxy Nexus was only available as a 16gb model (with a newer 32gb to come). So the limitation on available memory helped to push me towards the S II.

Overall, they are both nice phones the Galaxy Nexus has a really nice curvy form factor and an interesting tapered body, but considering you can get the S II for a lot less than the Galaxy Nexus, I would be inclined to pay less and still have the better specs and have the functions I like on the phone over the aesthetics and current OS. The lure of Ice Cream Sandwich isn’t a feature I felt compelled to have right away, as usually there will ultimately be some guinea pigs required to iron out bugs. Samsung has announced it would bring ICS to the S II likely by the first quarter of 2012, which only leaves a month a bit to wait.

If you can afford the costs/wait, the S III is rumoured to be on it’s way this year and apparently in the first quarter of 2012, of course that’s just the announcement, by the time the phone actually reaches consumers it’ll be much further down the track . So if you can, perhaps sit tight and wait it out, otherwise don’t look past the S II for the right price.

This wasn’t written as a full out comparison of the two, but just a few things I think stood out as considerations in keeping one phone over the other. If there are other factors you thought were crucial write a comment and let us know! 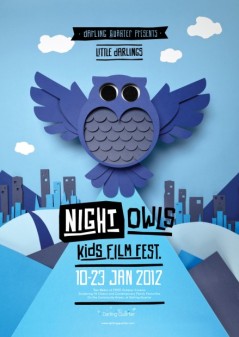 Owl and I watched Tangled (2010) tonight after having $12 steak at Stacks (Mon-Wed). It comes with either salad or chips and is about 300g.

The steaks were a little chewy (akin to most cheap steaks) but had a nice smoky flavour to it. I recommend ordering the steaks one level below what you like e.g. medium-rare for a medium steak. Dinner only starts at 6pm but they do offer a tapas menu beforehand. Since we only had about 15 mins to go we just ordered some beautifully crisp Pumpkin Arancini, which came with a tomato salsa and fronds of baby basil. I swooped in before we took pictures. Sorry, my bad  :p

The showground isn’t a large space but sufficient for the number of people that show up (since kids usually take only half the space one needs hehe). There are also benches and random ledges to sit on near the restaurants if grass isn’t your thing. Sound quality was very good and managed to rise above some of the rowdier bar patrons behind. Picture quality was also good. I would recommend bringing a jumper and a rug. It got pretty cold towards the evening despite the 27°C day! 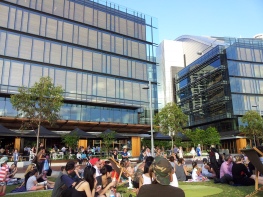 I had been looking forward to trying the Lemon Meringue gelato and the Salted Caramel Popcorn gelato from Meno Diciotto ever since they opened so this was the perfect opportunity. The Lemon was a beautiful blend of creamy tartness; not quite sorbet but more like chilled lemon curd. Soft and slightly chewy bits of candied lemon surfaced every so often to add a nice texture to the gelato, as did the more rarely found meringue. The Popcorn tasted like Macadamia but left kernelly bits in your mouth after the gelato dissolved which I very much disliked. They also sell little bags of popcorn if you want some for the movies! Service was efficient and genuine. Again, scarfed the gelato before any pictures were taken. Oops  >< 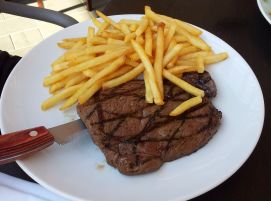 Here is the rest of the schedule from the Precinct website:

WordPress positively reinforces your reading their terms and conditions with a fancy photo of some charred meat dish with random small bowls of sides. Macaroni & Cheese. A Mince Pie Tart? And is that pickled mustard leaf at the back?

Besides instilling in me a love for bacon, teaching me about poutine and other such useful things as how to pronounce ‘couch’ authentically, Caleb-the-Canadian taught me a simple pancake recipe which I have since not found cause to find another. It goes as such:

I forget which flour to use so I always use self-raising (it’s my just-in-case flour).

One beautiful morning, I decided that we needed some pancakes for breakfast. And not just any pancakes but oatmeal pancakes! I whipped up Caleb’s foolproof recipe, replacing half a cup of flour with half a cup of quick oats.

Make a well in the middle of the sifted flour, pour in the wet ingredients and mix in the flour a little bit at a time from the crumbling flour walls. This is to ensure you get a smooth batter. A few quick mixes after full incorporation and you’re ready to pour it in lots onto the buttered pan. I always re-butter the pan between each pancake otherwise the subsequent pancakes don’t get a crisp golden-brown exterior. Keep the heat on medium and flip the pancake when bubbles start to pop on the surface.

NB. I actually find the original recipe 1 pancake too much for 2 people so I tend to reduce the flour and milk a bit with no negative effects.