Ant and I were invited to see Hairspray the musical at the Star City Lyric Theatre on Saturday night – 25 June (the show opened on the 24 June). To be honest I’ve never been a fan of the Hairspray movie or it as a musical, despite really enjoying musicals generally so I wasn’t really sure what to expect from this one. We had dinner out at Wasabi in Pyrmont and headed down to Star City for the 8pm show. The foyer was packed and by 8pm it was almost impossible to move around, unfortunately some stage difficulties delayed the show by a good 15 to 20 minutes and by the end had the crowds patience waning. Finally, we got in and upon walking into the theatre the set design was bright, simple and looked fun from the get go. The announcements are funny and for a minute you feel like you could be back in 1962. The set uses computer generated backdrops to embellish the scenes and the timing and use of this technique in itself is interesting and refreshing. 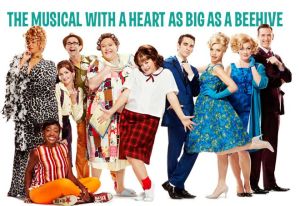 If you don’t know the story, the show is set in 1962 and focuses on high school student Tracy Turnblad and her obsession with and desire to be on the Corny Collins Show. Tracy isn’t your average star – she’s a big girl with big hair and has even bigger aspirations to unite  a segregated 1962 society. I’ve never found the music to be overly memorable, save for a couple of songs, but they were all sung with passion and the cast really brought them to life. Tracy’s mother Edna was played by Trevor Ashley who does such a great job of the role that I had a hard time believing he wasn’t a woman. If you saw the movie John Travolta plays this character, but somehow it just looked like Travolta in a fat suit and mu mu. Ashley on the other hand is superb!

The production has an amazing vibe and energy and the momentum is sustained throughout the whole show. The dancing is high energy and the numbers punchy, fun and catchy. You sometimes catch your breath at the moves the ensemble make and the speed in which they do them. The cast on a whole was truly excellent but there were standout performances from Jaz Flowers as Tracy Tunrblad and Esther Hannaford as her bestfriend Penny Pingleton. The role of Velma Von Tussle was played by Jacqui Rae on the night and it was done well. The calibre from the Australian cast is definitely something to rave about – right down to the accents you feel immersed in the experience.

If you haven’t bought tickets for this musical, you’re really missing out. I walked in unsure of what to expect from the night and walked away buzzing with energy and feeling like I couldn’t get enough. The audience gave them a standing ovation and I have to agree they deserved it! This will appeal to a varied audience and we had young and old mixed in the crowd. The only thing I would probably suggest is that it may not be appropriate for the under 12 as there are quite a few sexual innuendos and potential awkward moments for the little ones. If you’re happy to explain things though this might not be a problem.

If you’re a fan, you’ll probably also recognise a few of the cast from So you think you can dance Australia.

I give this a two thumbs up, and recommend this for a good night out – though you may want to consider getting a babysitter for the night because it does have a few innuendos which may or may not pass over your child’s head!